History of the Gold Wing and the New Tech for 2022

In mid-October 1974, the Cologne Motorcycle Show opened its doors. There was plenty to catch the attention of the press that year, including the all-new CB400F. Yet one bike stole the show. The motorcycle in question, the Honda GL1000 Gold Wing, was set to write a new chapter in motorcycle history. 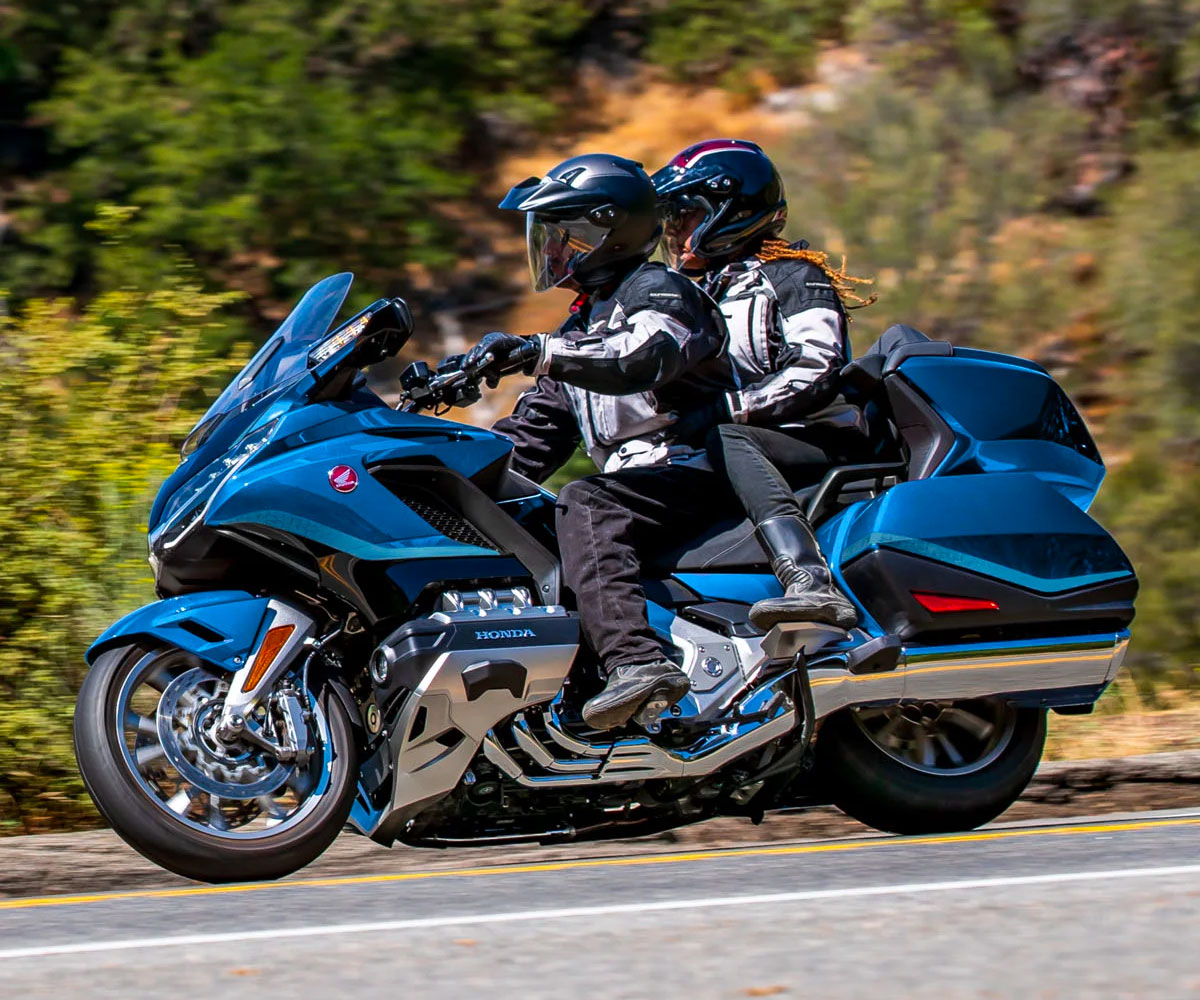 Regardless of the success of the groundbreaking CB750, Honda was not about to rest on its laurels. So in 1972, the company established an R and D department to develop an all-new flagship motorcycle.

The choice of project leader was Japanese designer Shoichiro Irimajiri. His success in both two and four-wheeled racing would combine the best technologies from both worlds.

In 1975, the Honda Gold Wing was the first four-stroke motorcycle with water-cooling. The flat-four engine was shaft-driven. It had many cool features, including a kick-starter lever stored inside the dummy gas tank.

At the time, Harley-Davidson dominated the big touring market in the US. Regardless of reliability issues, brand loyalty meant outselling alternatives like the expensive BMW R90/6 and the exotic Guzzi Eldorado.

The new GL1000 was fast, reliable and able to handle a cross-country run as if it were a walk in the park. Then, five years later and following several updates, Honda launched the game-changing GL1100 Interstate.

Six years after the Cologne Show, in 1980, Gold Wing Interstate became the first mass-produced Japanese motorcycle to appear in full touring kit, taking it to a new level.

At its 1975 launch, the Honda Gold Wing redefined the touring motorcycle. Almost 50-years later, the Gold Wing remains the yardstick to measure all other tourers.

While on the subject of low-speed manoeuvring, anxiety-inducing, fully loaded incline starts are now also in the rearview mirror for Gold Wing riders. Hill Start Assist (HSA) prevents the motorcycle from rolling backwards in those vital moments between releasing the brakes and hitting the throttle. HSA now comes as standard on all models.

Thanks to sleeker, future-proof looks and sharper handling, the 2022 Gold Wing is at the top of the motorcycle luxury travel food chain. 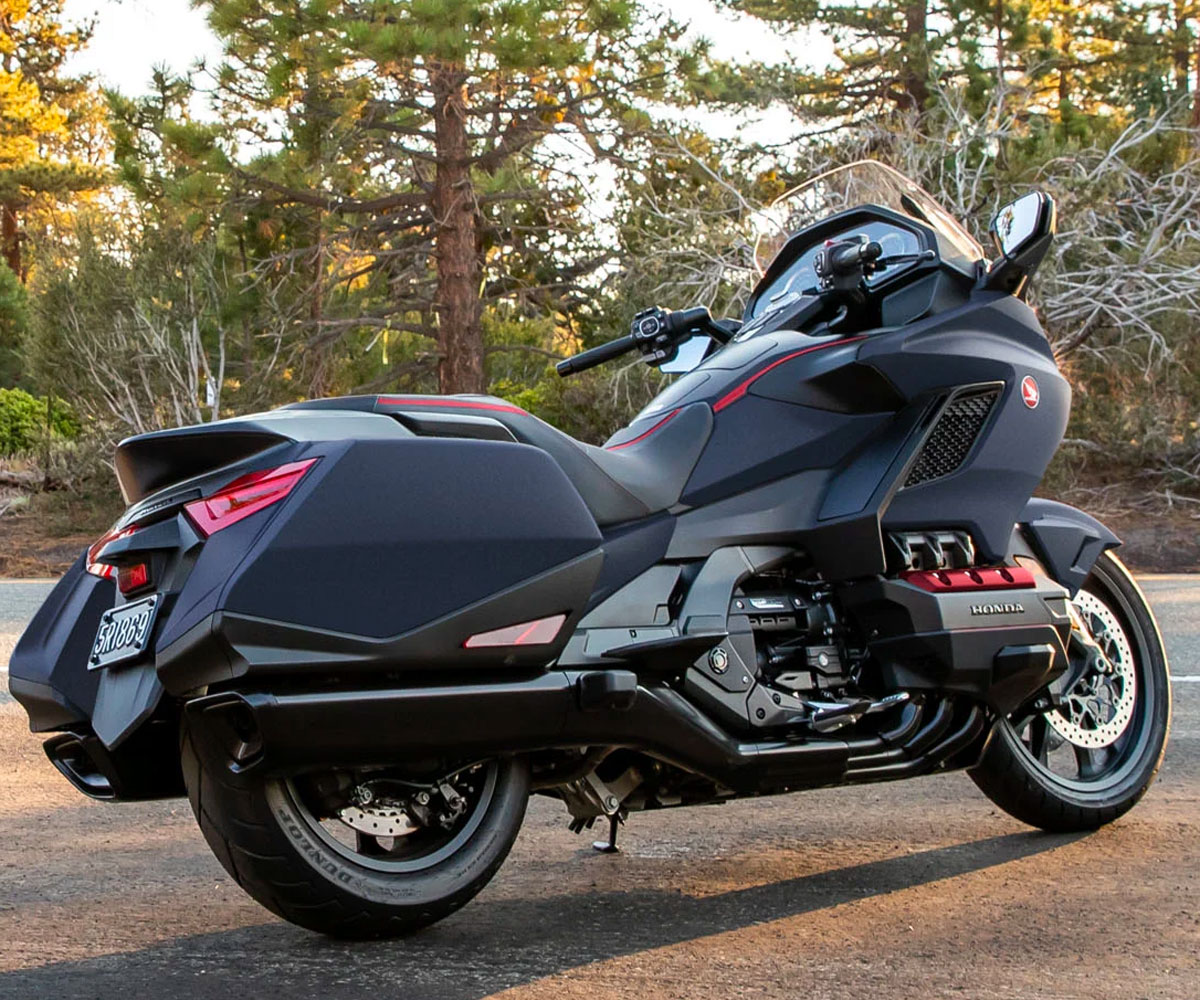 The inclusion of throttle by wire paves the way for four riding modes and Honda Selectable Torque Control (HSTC). Getting under the skin of the Wing also reveals the latest generation aluminium die-cast frame.

With suspension upgrades, courtesy of the double-wishbone front suspension, the 13-lb lighter engine is moved forward. This procedure increases rider and passenger comfort and improves steering.

Next is the Gold Wing Tour. This model is the only one in the Gold Wing lineup to offer a 6-speed manual-shift gearbox. In addition, the Tour is available in Ultra Blue Metallic and Metallic Black.

The third is the Gold Wing Tour Automatic DCT. This model has the same specification as the manual Tour but has a DCT 7-speed auto gearbox as standard. This model is also available in Blue and Black Metal Flake.

Last is the top of the range Gold Wing Tour Airbag Automatic DCT. As the name suggests, you get Honda's game-changing dual-clutch auto gearbox and the ultimate in rider safety; an airbag. For 2022, this model is available in Ultra Blue Metallic. 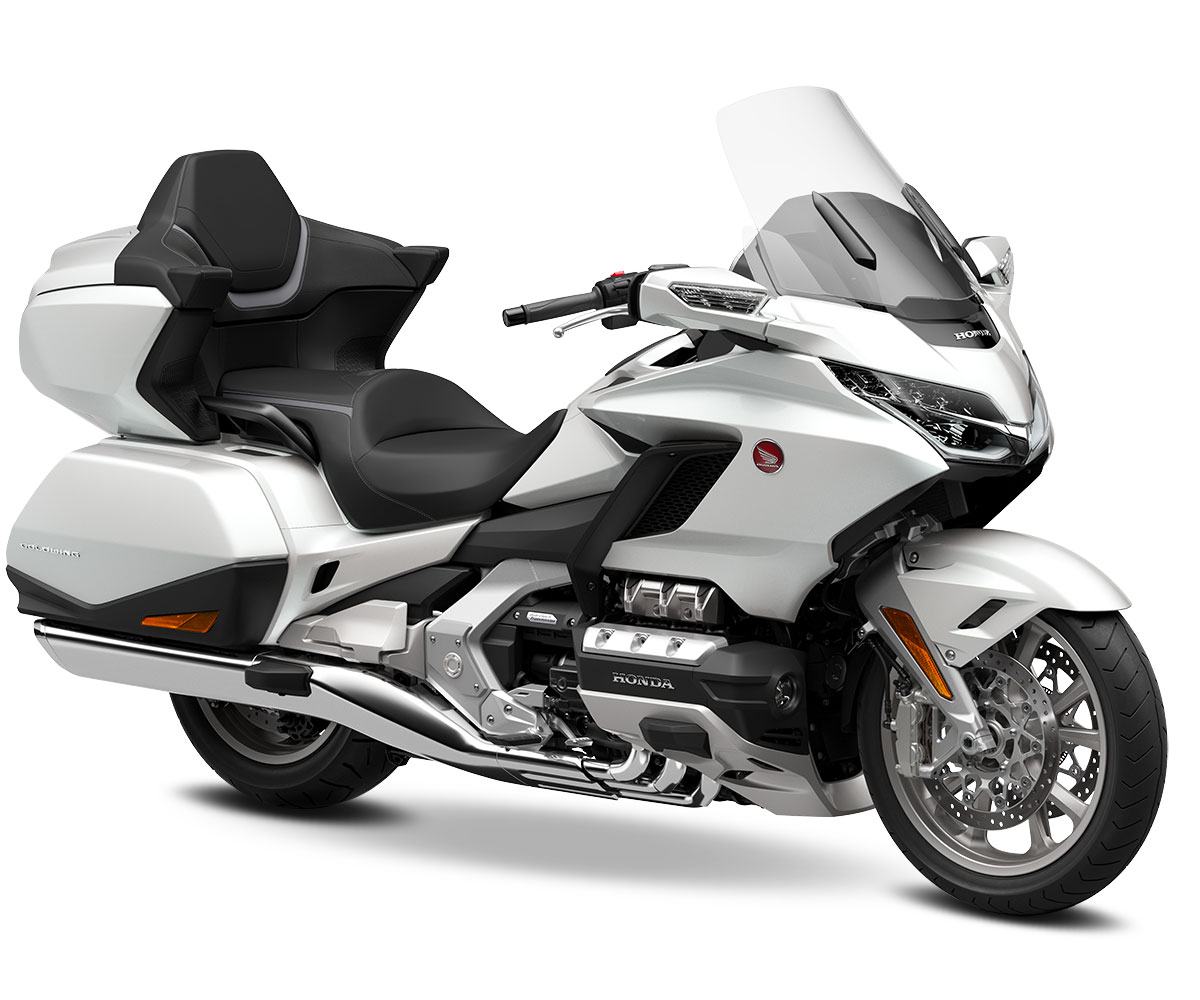 Mission Impossible? Not for the Gold Wing

Honda's reputation for quality and reliability is legendary but they are also technological innovators. For example, in 1969, the CB750 shocked the world as the first mass-produced motorcycle to feature four cylinders, a disc brake and an electric start.

In 1975, the Gold Wing GL1000 continued expanding motorcycle boundaries and is still riding at full throttle today. From creating groundbreaking rider enhancing features to designing the new technology needed to make it happen, the Honda Gold Wing has and always will lead the way.

The Gold Wing has evolved from a naked 1000cc flat-four to an 1800cc 6-cylinder, fully-faired grand tourer. It is now the final word in motorcycle touring luxury.

The new Gold Wing's DCT auto transmission, radical suspension, electronic rider aids and infotainment centre all combine to create a touring motorcycle at the top of its game.

At every stage of its 47-year evolution, the Gold Wing has provided an unparalleled riding experience. Thanks to Honda's "if it doesn't exist, create it" philosophy, motorcycle touring has reached new heights previously believed impossible.